The truck attack on the Christmas Market in Berlin is truly horrifying but not unexpected.  The German authorities have had clear warnings of attacks on Christmas markets for weeks.  But could they have done anything to prevent such an attack?  The fact is they did next to nothing and Germans and tourists paid the deadly price.  Germany has to change its counter-terrorism program or face more deadly incidents.

In Nice the attack there could have been prevented had the police protection of road barriers been kept in place until people attending a parade in that city had time to go home.  But the police were removed prematurely exposing Nice’s citizens and visitors to an attack by a large truck that proved very hard for the police to stop.  That attack, last July, was preventable.  In the aftermath, some police were complaining that the barriers were taken down too early or that there was an insufficient presence of police at the scene.  It is known, for example, that the refrigerated 19 ton van, that was leased, was not permitted on the roadway. Even so, the driver made four practice runs up and down the promenade road before the barriers were put in place without anyone taking notice. 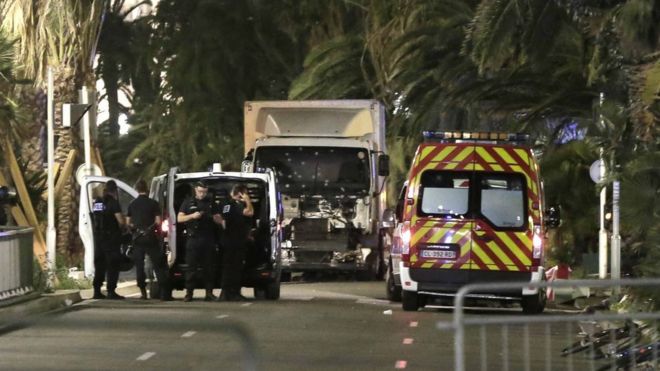 (Above) Scene in Nice.  Observe the bullet holes that finally killed the lorry driver.

In Germany, the authorities –despite the warnings– did very little to protect Christmas markets like the one at Breitscheidplatz Square, outside the Kaiser Wilhelm Memorial Church in the German capital’s main shopping area.  There the apparently hijacked Polish-owned van ran down pedestrians and market stalls, hitting them at a speed of 40 mph.

Here (Below) is a view of the Christmas Market that shows how the market stalls come up alongside the main thoroughfare. The area could have been protected by heavy cement Jersey barriers put there on a temporary basis.  Looking at the overhead view, it is clear there was adequate room to place such barriers.  A ten foot Jersey barriers section weighs almost 5,000 pounds.  Because they feature curved sides, Jersey barriers are used to protect against vehicles “jumping” lanes, including trucks.  While not a perfect solution, temporary jersey barriers would have likely saved lives.  Another alternative would be permanent cable barriers along the periphery of the Christmas Markets.  Had there been a desire to install them, there was time between the warnings received of a threat to Christmas Markets and the December 19th attack.  Cable barriers are regarded as more effective than Jersey barriers.

The US warned Germany of the high risk of attacks on Christmas Markets on November 22nd.  “The US State Department said it had “credible information” that Islamic State of Iraq and the Levant (Isil) and al-Qaeda were planning attacks and focusing on the “upcoming holiday season”.   American tourists were explicitly warned to avoid Christmas markets. It is astonishing that there was only minimal security in place to protect these locations.

The German newspaper Die Welt (as reported in the London Daily Mail) said: “ISIS had, in recent weeks, had made renewed calls for disciples to carry out atrocities in Europe and German intelligence warned Berlin authorities recently that the city’s bustling markets – tourist magnets for foreigners – were vulnerable to attack.”

The alleged suspect is a Tunisian asylum seeker named Anis Amri.  He is closely tied to ISIS through Tunisian allied terror organizations.  The German police are said to have been tracking him but “lost” him.   According to the London Daily Mail, the “Tunisian asylum seeker, 23, suspected of carrying out Berlin massacre was arrested THREE times this year amid fears he was planning a terror plot – but police [in Germany] let him go and are now offering 100,000 euros to anyone who finds him.” It also turns out he got into Europe through Italy along with other alleged Syrian refugees.  In Italy he set fire to a school and was jailed for four years. How we wound up in Germany after serving his jail term is not known but it appears that he just went there after leaving jail.  No one stopped him: there are no borders inside Europe. Unless we learn otherwise, he should have been deported after serving his jail term but it seems he was just released.  Soon we will learn more, but incidents like this demonstrate a total lack of competence in dealing with significant threats which exists at all levels of government and law enforcement.

German Police are seeking Anis Amri, a Tunisian, as a lead suspect in the Christmas Market attack. His papers were found in the crashed truck.

When it comes to security to try and prevent attacks, the more security forces are visible and present, the less likely an attack will be planned and carried out.  The objective of ISIS-led attacks, like other terrorist-led operations, is to inflict maximum casualties and create a horror that will destabilize the government and undermine the confidence citizens have in law enforcement.  Obviously, the lack of any visible deterrent characterizes the Christmas market attack in Berlin.

In the UK where there was a credible deterrent, left wingers criticized it.  One of them wrote: “Safety is the last message this [police] presence is sending out. It’s sad, and an extreme over reaction to a very slim chance of a terrorist attack. More likely to be hit by a drink driver.”  Nothing better illustrates the stupidity overtaking Europe these days, some of it washing up on our own shores too.

It is no small thing to stop a speeding truck.  The truck used in the Berlin attack was a 25 ton vehicle, and it was packed with a load of steel girders that were supposed to be delivered to customers in Berlin.  All reports to date show that the truck was hijacked.  The trucking company owner says he lost contact with the driver (his cousin) and could not reach him.  The truck had stopped and started a number of times and was not being driven correctly.  Unfortunately, so far as is known, the errant truck was not reported to authorities so police in Berlin had no information there could have been a hijacking or that a truck had gone missing that was heading to Berlin.

One useful step that law enforcement in Europe should have implemented would be an alert system on the location of vehicles.  Trucking in Europe (as in the United States) is closely regulated so the potential exists to track these vehicles and warn if routes are abridged or other unusual information reaches trucking company managers.  The fact the truck in the Berlin attack was modern, equipped with GPS and monitoring equipment, indicates that the trucking  company could have reported the situation to law enforcement when the truck apparently went missing.  But to bring this into focus, law enforcement would need to have put out a bulletin or warning to trucking companies explaining the risks and asking them for any unusual information.

Above all it seems that passing on warnings did not result in any action capable of preventing the Berlin Christmas Market horror.  Germany must reassess how it does business if it wants to have any chance of stopping terrorist attacks.

Now it looks like they are installing barriers around the Christmas Market (see photo below).  Perhaps they read my article above!

Installing Barriers at the Christmas Market